How far First Aid has come... 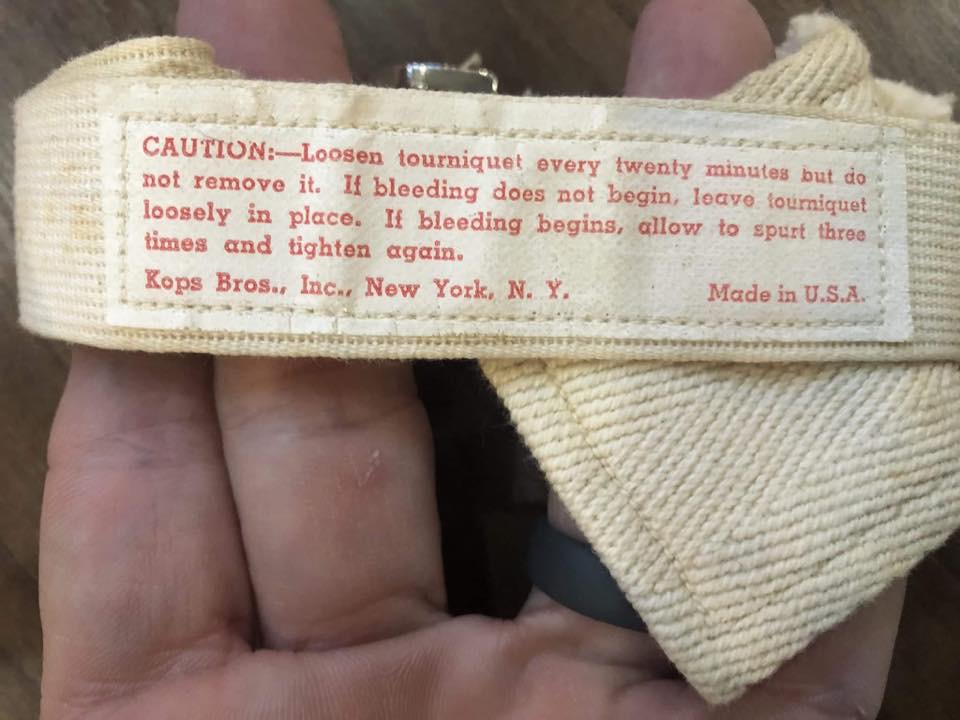 The directions on this old boy say to “Loosen tourniquet every twenty minutes but do not remove it. If bleeding does not begin, leave tourniquet loosely in place. If bleeding begins, allow to spurt three times and tighten again.” 😬😬😬

Soooooo.... maybe don’t let it spurt Canberra. The aim is to stop the spurting. 😂

For severe, life-threatening bleeds tourniquets should be applied ‘high and fast’ (at least 5cm above wound, but upper limb is a pretty safe bet). Once applied, DO NOT RELEASE THE TOURNIQUET.

Bleeding should be managed as severe, life-threatening bleeding in the following situations:
• amputated or partially amputated limb above wrist or ankle
• shark attack, propeller cuts or similar major trauma to any part of the body
• bleeding not controlled by local pressure
• bleeding with signs of shock, i.e. pale and sweaty plus pulse rate >100, or capillary refill > 2 sec and/or decreased level of consciousness

What can I use to make a tourniquet?... if you have a first aid kit, then grab your compression bandages and apply them as firmly as possible with each wrap, until the bleed slows and eventually stops. Otherwise... an improvised tourniquet may be attempted using triangle bandage, clothing etc. Improvised tourniquets should be tightened by twisting a rod or stick under the tourniquet band like a windlass.

The time of tourniquet application should be noted and communicated to emergency services. Once it has been applied, the tourniquet should not be removed until the victim receives specialist care.